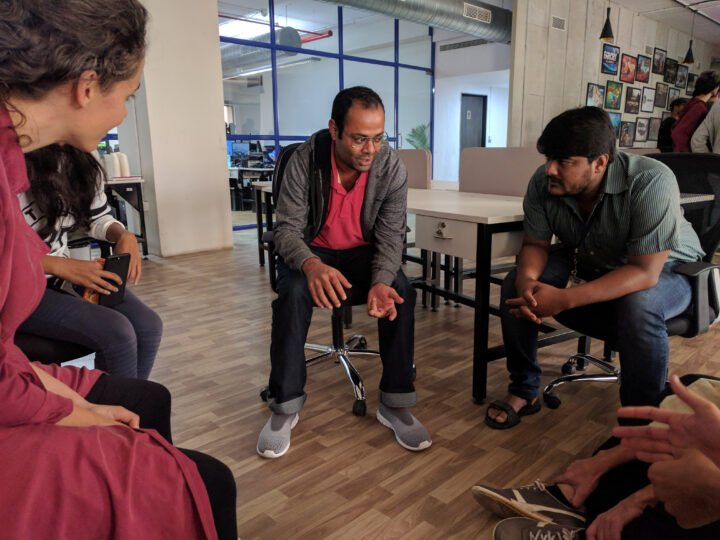 Our aim is to investigate and prototype novel uses for smartphones, considering their advanced motion sensing abilities. In particular, we explore how body-centered approaches could be applied to uncommon use cases of mobile technologies. Our contribution is based on collaborative knowledge and gesture design. What are the relationships between gestures, body movements and their engagement in collective games through the use of mobile technologies?

The anthropology of gesture and the analysis of body techniques provide a strong basis for conceiving augmented gestures. But how to generate new kinds of collective knowledge augmented by technology? And how to innovate in smart device design?

Mark Weiser’s vision of ubiquitous computing, initially proposed in the 1990’s, seems to prevail nowadays with the widespread use of mobile computing and computer-mediated communication. Nevertheless, the initially positive vision that “ubiquitous computing may mean the decline of the computer addict” is far from realized, considering our daily use of smartphones and our ensuing addictions to screens. Indeed, such technologies deeply impact our social behaviours and affect our perceptions in ways that none could have predicted more than twenty years ago.

Artists, philosophers, ethnographers and designers contributions, offer stimulating and critical perspectives on user choices. The French artist Julien Prévieux for example, criticizes the fact that manufacturers impose gestures’ controls on mobile technologies. His artworks criticises the fact that major tech companies patent human gestures. “What Shall We Do Next” asks very disturbing question of both authorship and identity of gestures.

A complementary perspective is proposed Nicolas Nova who describes the “curious” smartphone interaction gestures such as rituals [3]. The designer depicts the social impact of mobile technologies in everyday lives. Nova details his observation under sketches, titles and comments. Nova’s book portrays curious postures humans can take while using diverse technological apparatus (e.g. the baboon face, performed when once does not want to be heard ; the periscope, as the very iconic gesture of a whole generation using smartphones in concerts) and transcribes mordant criticism on our contemporary habits: “The Obsessive Checker: These digital obsessives have their cell screen within reaching distance at all times. They repeatedly lean their heads down, checking for signs of any potential updates such as SMS, emails, or any app notifications.”

As a group of researchers and artists, we do explore these questions through alternative design propositions for various uses of smartphones. From connected objects to tangible interfaces, we do aim at enlarging the boundaries of current thinking about mobile computer technology. This includes experimenting with embodied and collective interactions, as well as designing proposals for new gestures and body engagement in the manipulation of smart-objects.